The Decatur Jaycees will present its annual Christmas Parade on December 1, 2014, in downtown Decatur. The theme for this year’s community parade is “A Christmas Carol” and grand marshall is Retired Judge David Breland.

Judge Breland is a native and life-long resident of Decatur. He served as Morgan County District Court Judge from 1983 to 2008 where during this time, the court was honored on numerous occasions for its case administration efficiency. In 2006, he was presented the Barrett C. Shelton Sr. Freedom Award, was named Judge of the Year by the Alabama Fatherhood Initiative in 2007, received the Decatur-Morgan County Chamber of Commerce A.C. Banks Citizen of the Year and the Newton B. Powell Service Award for lifetime achievement as an elected official in North Alabama in 2008, and is the recipient of many other community, state and national humanitarian awards. Today, he serves as the program coordinator for the Historic Preservation Commission and is a member of the Rotary Club of Decatur.

Line-up begins at 5:30 p.m. with the parade making its way down Second Avenue at 6 p.m. following its usual route of Second Avenue, Lee Street and Bank Street.

The Christmas spirit continues with a movie at the Princess Theatre. “Scrooge”, complimentary of the Rotary Club, will be shown free to the public immediately following the parade.

In case of inclement weather, the parade will be held the following Monday, December 8, 2014. The free movie will take place on December 1 regardless of the weather.

http://www.decaturjaycees.com/other-events/christmas-parade
Posted by River C at 2:07 PM No comments:


The Alabama Junior Cup Tournament returns to the Jack Allen Recreation Complex next month as part of a three-year commitment. The 2014 Alabama Junior Cup Tournament, an Alabama Youth Soccer Association and United States Youth Soccer Association (USYSA) sanctioned tournament hosted by Premier Soccer Services is set for November 22-23, 2014, and organizers are expecting up to 75 boys’ club teams from Alabama, Mississippi and Tennessee. All matches will be played at the Jack Allen Recreation Complex located in Decatur, Ala.

The Alabama Junior Cup is a tournament offering USYSA affiliated Premier, Challenge, Classic, and Academy level U9-U14 boys’ competitive soccer opportunities. There will be a minimum of two divisions per age division – an elite level of play and 1-2 competitive divisions tiered lower. Trophies will be awarded to the championship and runner-up teams in each age division.

Games get underway at 8:45 a.m. on November 22nd and 23rd.  For the Finals on November 23rd, players can participate in an international walkout with the U.S. National Anthem prior to the start of matches.

Each team consists of an average of 12 players, with each player accompanied by three or four family members. Participants and their families will take of advantage of local hotels, restaurants, and other businesses in Decatur during the two-day tournament providing an economic boost to the local economy.

The Jack Allen Recreation Complex will also serve as host venue for the tournament November 20-22, 2015. For complete registration information on the tournament, visit www.premiersoccerservices.com.

For more information on the Jack Allen Recreation Complex, visit www.decatursports.com.
Posted by River C at 2:24 PM No comments: 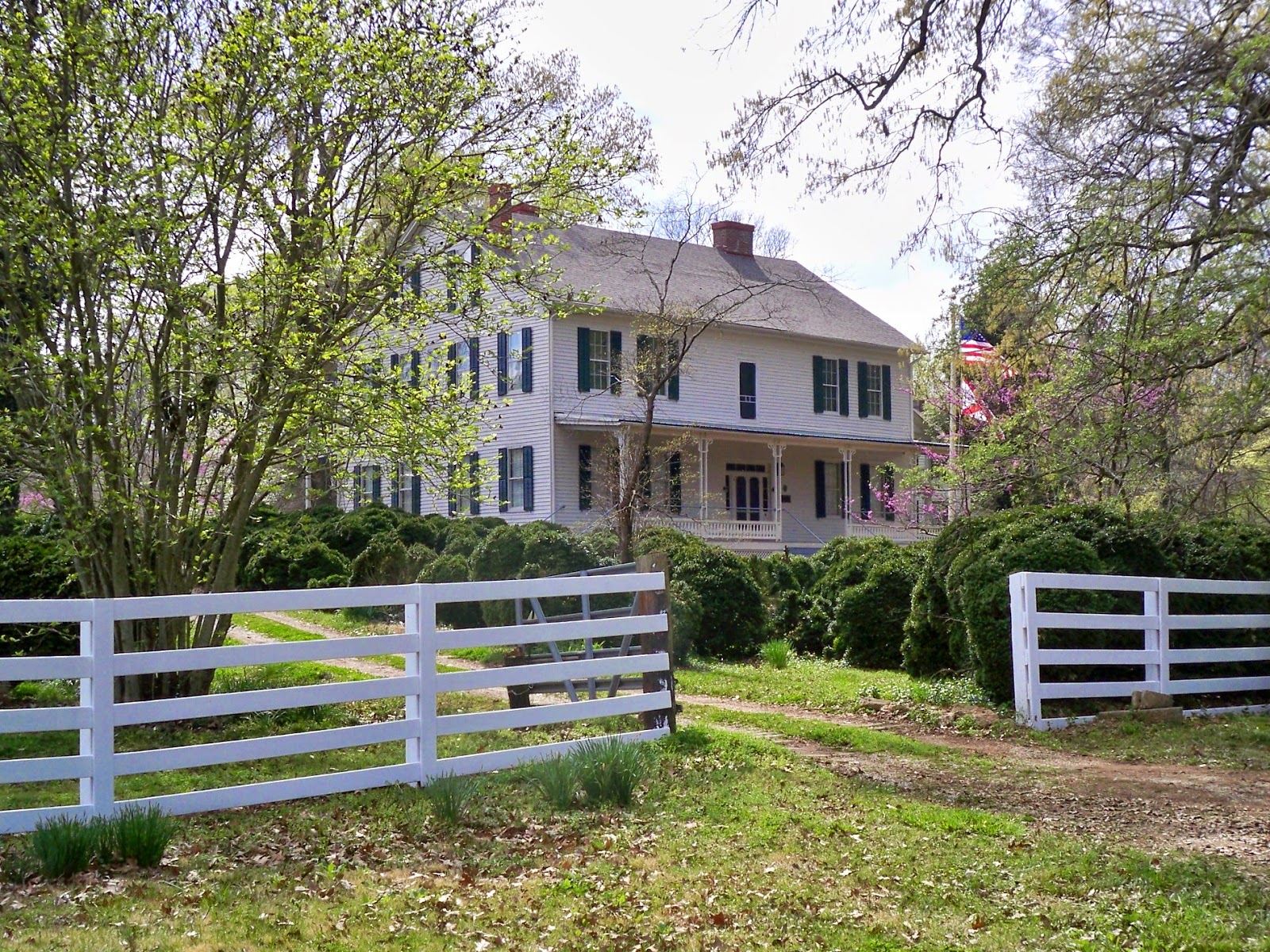 Pond Spring, the General Joe Wheeler Home invites you to Christmas at Wheeler on Saturday, December 6, 2014 from 9 a.m. until 3 p.m. This event is a fun, family start to the Christmas season! Visitors will tour the museum adorned with live greenery and decorations, enjoy refreshments of sweet treats and hot cocoa, children can take “sleigh rides” in a horse drawn buggy, and families will enjoy choral concerts featuring local school and church choirs. Admission to Christmas at Wheeler is free on the grounds, with the cost of admission to the historic house museum, at the rate of $8 adults, $5 seniors, college students and military with ID, $3 youth 6-18 years, and children under 6 years admitted free.

Pond Spring, The General Joe Wheeler Home is a historic house site 20 miles west of Decatur in Hillsboro, AL on Hwy 20 / Alt 72. The home of General Joseph Wheeler, a Confederate cavalry general during the Civil War, and later in life, a general with the United States Army during the Spanish American War, is now a historic museum. The Wheeler family owned the site for over 100 years, and donated the home to the state of Alabama in 1990. The museum is one of the most complete house museums in the nation, almost entirely furnished with items original to the site including china, uniforms, furniture, and family letters and photographs.

“This is the first Christmas event to be held at the Wheeler Home since it was closed for restoration 14 years ago, and we are very excited to revive this special tradition,” said Kara Long, Site Director of the Wheeler Home.

During the annual tourism breakfast hosted by the Decatur-Morgan County Convention and Visitors Bureau (DMCCVB) and the Decatur/Morgan County Hospitality Association on November 13, 2014, at Ingalls Harbor Pavilion, tourism figures for 2013 were presented and ten individuals and companies were recognized for excellence in tourism. 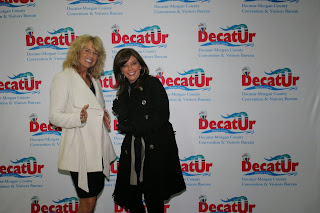 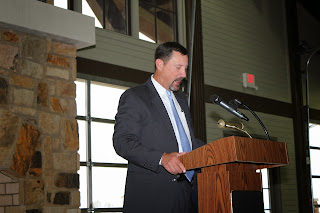 Forrest Keith, DMCCVB’s chairman of the board, also added, “Over the ten year period from 2004 to 2013, tourism expenditures have increased 50 percent in the state of Alabama. Through the efforts of the Decatur-Morgan County CVB staff, board, hospitality industry partners, civic leaders, and our citizens, Decatur and Morgan County are playing a role in this growth. 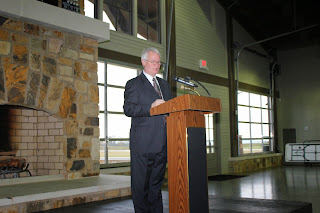 During the annual breakfast, the Decatur/Morgan County Hospitality Association honored area hotels, industries, and citizens with its annual awards. Based on data submitted from hotels in Decatur, the Top Five Corporate Companies producing the most room nights in Morgan County during 2013 were recognized. Those receiving recognitions were International Paper with 1,843 room nights; 3M with 2,202 room nights; United Launch Alliance with 2,290 room nights; Nucor with 2,939 room nights; and Daikin America with 3,217 room nights. 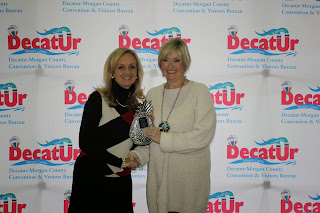 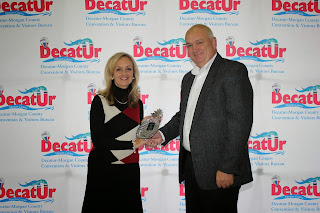 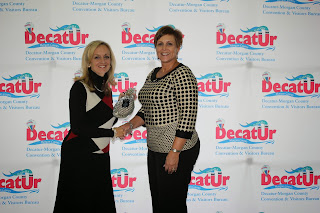 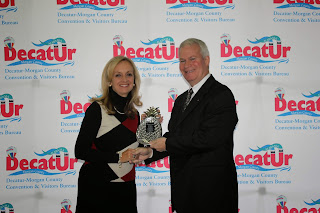 Acknowledging a special event or festival in Morgan County that has made a great contribution to tourism in the past year, the Event of the Year award went to the River City Rivalry Lacrosse Tournament. Realizing that lacrosse is one of the fastest growing sports in America, efforts were made to begin marketing the Jack Allen Recreation Complex as a lacrosse venue. The River City Rivalry made its first appearance in 2012 with 20 teams, and in 2013, 50 teams from across the southeastern United States participated in the two-day competition. 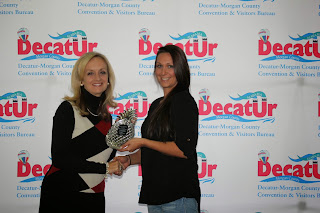 Awarded to a person or organization whose body of work has had a significant impact on tourism in the past year, the Good Neighbor Award was presented to Academy Sports and Outdoors. As a strong supporter of local events, Academy Sports and Outdoors has offered a variety of resources included awnings, tents, gift cards, bag chairs and other necessities for use at local tournaments. They have hosted registrations and weigh-in’s at their store and have served as sponsors. 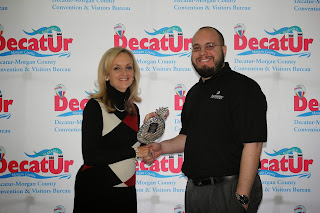 The Tourism Professional of the Year award is presented to the person who has exhibited extraordinary leadership skills and initiative associated with their position. The Tourism Professional of the Year was awarded to Ms. Dana Murphree, general manager of the Quality Inn. Working in the hotel industry, Murphree has performed almost every job imaginable – maintenance, front desk, housekeeping – with a work ethic that brings excellent customer service to all guests visiting. Her hard work has allowed her to move up in her career, starting out in housekeeping to now general manager. She is also a talented artist who has provided personalized artwork to welcome events at her property. 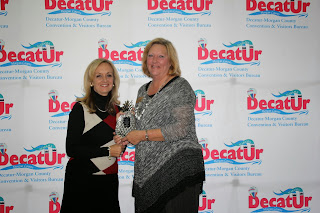 Presented to a person, or persons, within Morgan County who has contributed significantly beyond their professional duty to the development and promotion of tourism for the betterment of Decatur and Morgan County, the 2014 Julian Walker “Mr. Tourism” Award was awarded Roland Langley, owner of Graphics South. Langley worked closely with Julian Walker for whom the award is named, and comes from a family that loved and breathed tourism. Always willing to make time for his clients and projects and sharing creative ideas on a whim, Langley has worked tirelessly behind the scenes for many years to improve the image of Decatur and Alabama. 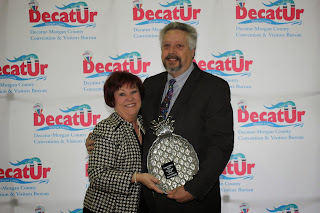 The Gilmer Blackburn Legacy Award was created as a means of recognizing an individual who has shown a long lasting and permanent contribution to the industry over the years and has helped change the tourism landscape of Morgan County. It is named in honor of the late Mayor Blackburn who was instrumental in developing the foundation of the tourism industry here. The 2014 Gilmer Blackburn Legacy Award was presented to Mr. Ronnie Dukes. Known for his kindness, generosity and personal integrity, Dukes is active in many community organizations and boards, including board member and past chairman of the board for the Decatur-Morgan County Convention and Visitors Bureau. 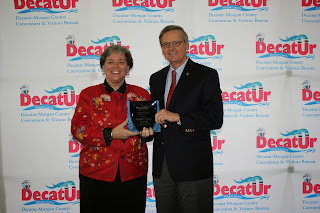 With this year’s theme “Tourism in Action”, participants to this year’s Tourism Breakfast were literally seeing tourism in action as Ingalls Harbor and Wheeler Lake play host to the American Bass Anglers Ray Scott Championship. Approximately 200 top weekend bass anglers from throughout the country are in the River City to earn a $100,000 cash prize and a spot in the Bassmaster Classic. “Tourism in Action means big business for Decatur and Morgan County,” said DMCVB President and CEO Melinda Dunn. “Our work to build and strengthen the traveling public’s interest in our attractions, events, festivals, recreational facilities and tournaments is essential to the overall health of our local economy. Tourism in Decatur and Morgan County would not have reached the level it has reached today without the excellent partnerships we enjoy with our tourism industry associates, governmental leaders, city and county departments, the work of the CVB staff and the support and guidance from the CVB board of directors.” 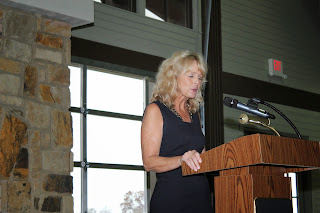 Sponsored by the Riverwalk Yacht Club, Riverwalk Marina and Hard Dock Café, the annual Parade of Lights will take to the waterway, illuminating Wheeler Lake, on Saturday, December 13, 2014. The free holiday maritime event features approximately 15 to 20 boats of all types and sizes decorated with lights, holiday themes, and other festive trimmings for the holiday season. The public is also invited for a leisurely stroll around the docks for an up close look at the brightly lit boats prior to the parade.

Beginning at 4 p.m., the docks at Riverwalk Marina open allowing the public to admire the boats and their holiday decorations before they set sail.

At 6 p.m. the boat parade will take its usual circular route, making two trips from the entrance of Riverwalk Marina located on Highway 31, west to the Railroad Bridge turning east in front of Rhodes Ferry Park to the Highway 31 bridge, and then back into the Marina. The best viewing will be at Rhodes Ferry Park, the Hard Dock Café or at the Marina.

During the parade, the Riverwalk Yacht Club will be accepting canned goods to donate to the Committee on Church Cooperation. Donation boxes will be placed near the train crossing at Rhodes Ferry Park, at the entrance of Hard Dock Café and by the small building at the Marina entrance.

Anyone interested in participating in the parade or for more information, contact Kristy Burgreen at 256.527.7246. A registration packet and additional information is also available at riverwalkyachtclub.shutterfly.com.
Posted by River C at 1:34 PM No comments: