The Decatur-Morgan County Convention and Visitors Bureau was named the 2008 Organization of the Year among the state’s tourism industry. 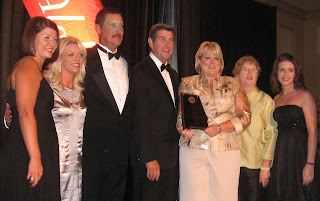 The Alabama Bureau of Tourism and Travel recognized the local bureau for excelling in all areas of tourism. Travelers spent $176.5 million in Morgan County in 2007, the state bureau said, representing a 10 percent increase from 2006.
“The success of the CVB is contingent on so many individuals, starting at the top with our board of directors,” said Tami Reist, local bureau president. “We are very fortunate to have strong, passionate leaders who understand the nuts and bolts of the tourism and travel industry.”
Reist also credited her staff’s commitment, passion and willingness to serve “beyond the call of duty” for all events, large and small.
Events
The staff lured unique events such as the Stihl Timbersports lumberjack competition and the Downtown Decatur Criterium bike races, as well as numerous soccer, softball and tennis tournaments.
Criteria for the award include outstanding performance, outstanding economic impact statistics, quality and effective marketing efforts, and additions and/or improvements to increase the appeal of the community to tourists.
The state lauded the local bureau for starting a service for reserving hotel rooms for major events like soccer tournaments. To date, that service has received more than 7,000 reservations.
Decatur was host to four major fishing tournaments in 2007, has scheduled to handle 10 in 2008 and already has seven lined up for 2009.
The state also praised the local bureau for working outside its county borders, such as working with the Lawrence County Chamber of Commerce to coordinate and house successful cross-country events at Oakville.
Posted by River C at 2:41 PM No comments: