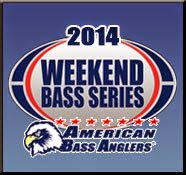 The American Bass Anglers, who conducts the largest and most prestigious tournament trail for weekend anglers, is bringing its Weekend Bass Series to the River City on May 17, 2014.  Over 150 amateur anglers and co-anglers will compete for a total purse of up to $52,000 cash plus sponsor-supported bonuses.

The Weekend Bass Series is designed for the weekend bass angler offering 100 qualifying events annually. In each qualifying event, the winning boater may receive up to $6,000 cash, based on a full field. The winner may also qualify for another $7,000 in Triton Gold bonus money totaling $13,000 for the day. The winning co-angler in each event may win up to $3,000, with a full field, plus the opportunity to collect significant bonus cash and prizes from tournament sponsors. Only largemouth, smallmouth, spotted or Redeye bass will be weighed. The limit for boaters is five and three for co-anglers.

The tournament is open to current members of the American Bass Anglers who are 16 years and older. Tournament organizers are expecting up to 170 anglers to travel to Decatur to compete. Top boaters and co-anglers will advance to the regional championship set for September 26-27, 2014, on Lake Chickamauga in Dayton, Tenn.

Ingalls Harbor, located at 802 Wilson Street NW in Decatur, will host the takeoff and weigh-in.

For more information on the American Bass Anglers and the Weekend Bass Series, call Tournament Director Kristin Malott at 256.771.3709 or visit www.americanbassanglers.com.
Posted by River C at 2:20 PM