US Youth Soccer Region III Presidents Cup To Be Held in Decatur June 12-15, 2014 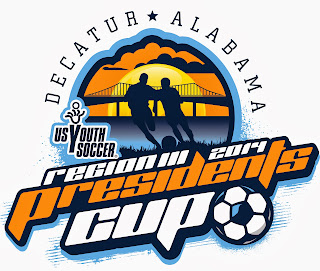 The City of Decatur will host the US Youth Soccer Region III Presidents Cup in 2014 attracting 120 elite teams from across the southeastern region of the United States. Set for June 12-15, 2014, the event will be hosted by the Decatur/Morgan County Convention and Visitors Bureau and Decatur Parks and Recreation.

The Region III Presidents Cup is for boys and girls, U13-U17, who are competing for a spot at the US Youth Soccer National Presidents Cup. In 2014, this will be Region III Presidents Cup fourth appearance in the state of Alabama. In 2006 and 2011, the city of Decatur co-hosted the prestigious event with the city of Huntsville attracting over 2,500 soccer players and families and filling hotel rooms in Athens, Madison, and Huntsville during both visits. The City of Decatur hosted the tournament also in 2013, which produced an economic impact of over $2.9 million for the city and surrounding area.

All games will be played at the Jack Allen Recreation Complex and Spirit of America Fields at Point Mallard Park.

Region III consists of teams from Alabama, Georgia, Florida, Tennessee, Mississippi, South Carolina, North Carolina, Arkansas, Louisiana, Oklahoma, North Texas and South Texas. The Region III qualifier determines the teams in the Under-13 through Under-17 Boys and Girls age groups that will advance to the US Youth Soccer National Presidents Cup, which is typically held in July.  For more information on the Presidents Cup, visit www.usyouthsoccer.org/presidentscup/index.asp.

For more information on the Jack Allen Recreation Complex and Spirit of America Fields, visit www.decatursports.com.