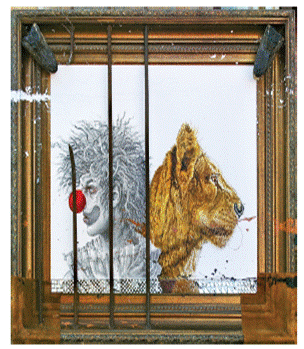 Carnegie Visual Arts Center
Decatur, AL – October 9, 2009 –The Carnegie Visual Arts Center is pleased to announce NALL - Out of the Box. The exhibit opens to the general public on Saturday, October 17 and runs through November 28, with special preview events scheduled for October 15 and 16 where the artist will be the guest of honor.
The exhibit features many new works by Nall. Over 60 pieces are includedin the show. Large original installation pieces, etchings and giclee prints of the the Bellingrath Gardens flower series and the Violata Pax icons make up the majority of the body of work displayed. A casting of the Violata Pax Dove and other three-dimensional works will also be presented. Furniture printed in Nall motif and examples of his dinnerware and fl atware designs round out the one man show. Numerous Nall items will be available for purchase in the gift shop including books, etchings, prints, posters, playing cards, postcards and other items. Many pieces from the exhibit are available for purchase.
Nall’s work is well known and widely collected in North Alabama. A Southern artist with an international following, Nall has a unique style that has captivated the attention of the world. A native of Troy, Alabama, Nall spent his formative years in Arab. He received a degree in Art, Political Science and Psychology from the University of Alabama in Tuscaloosa and in 1971, Nall
traveled to Paris where he studied under the internationally acclaimed artist, Salvador Dali, and attended the prestigious L’Ecole des Beaux Arts. After many years in Paris, Nall moved to the south of France. He resides in Fairhope, Alabama, and maintains the N.A.L.L. Art Association in Vence, France. The institute trains and educates young artists, many of whom are recovering from alcohol, drugs and 21st century abuses.
Surrounded by painters, musicians, and writers, he excelled among his contemporaries while studying at L’Ecole des Beaux Arts. During this time Dali advised him to “Draw from life, draw, again and again...” Nall was also inspired by American psychedelic art, fauvism, impressionism and Japanese wash drawings. His current works represent a fusion of his Southern roots and the contemporary stylism of modern Europe. Yet, it is the symbolism and the themes of his work that expose the genius of the fl amboyant artist. Nall, a consummate southern gentleman with a dash of glitz, is a study in contradictions much as his massive works of art stretch the mind from the obvious to the veiled suggestion.

A prolifi c and exciting painter, Nall is also well known for his sculpture and porcelain. As well as exhibiting his art throughout the world, Nall recently created the costumes and sets for the famous Puccini Festival in Italy. His Havilland and Parlon Porcelain from Limoges, France are sold internationally. His monumental sculptures were shown at The Basilica of Saint Francis of Assisi and Pietrasanta, Italy, and Monaco, where his ‘Peace Frame’ is permanently installed. His ‘Violata Pax Dove’ is currently being exhibited at the Pisa, Italy Airport, Miami Dade University, and Vence, France. There seems no limit to the talents displayed by this unpredictable artist. A complete detail of his extraordinary body of work may be found at http://www.nallart.com/
Nall’s dedication to his home state – and to the further development of the arts in Alabama –has been played out over and over. From time spent as artist in residence at The University of Alabama in Tuscaloosa to the mentoring of dozens of emerging artists, Nall supports those beginning their exploration by providing the wisdom of experience and the most valuable tool for any artist – encouragement. In 2000 Nall was the curator for “Alabama Art,” an exhibit of 13 Alabama artists, with the aid of the Montgomery Museum of Fine Art and the Alabama State Council on the Arts. Nall compiled the works and did the layout for the book titled Alabama Art published by Black Belt Press. This book won the Mary Ellen Lopresti ARLIS/Southeast Publishing Award for “Best Art Book” published that year in the Southeastern U.S.A. After serving two semesters as artist-in-residence at Troy University, Nall was awarded a Doctorate
Honoris Causa from Troy University, Alabama.
Nall is currently working on a new line of Limoges Dinnerware Porcelain of Alabama Camellias, produced by the Tunisian Porcelain Company, including six of Mobile’s Bellingrath Gardens Camellias. He has also started a new Book entitled The RSA Permanent Collection of Alabama Art, which includes more than 150 Alabama Artists to be published by American Image Publishing, LLC. His 2010 illustrated agenda book will be available this fall.
Nall and his work have been acclaimed by CNN, The New York Times, The Wall Street Journal, USA Today, Time Magazine, the Italian Republica, the French La Figaro, and The LA Times.
The Carnegie Visual Arts Center is located at 207 Church Street in historic downtown Decatur, Alabama. Museum hours are Tuesday – Friday 11 AM – 6 PM and Saturdays 11 AM – 4 PM. There is no admission, however, donations are welcome. For more information visit www.carengiearts.org or call (256) 341-0562.
Posted by River C at 8:17 AM