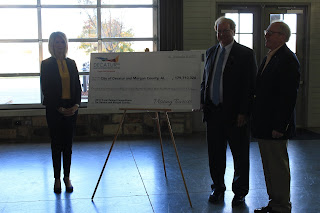 Decatur, Ala. (November 9, 2017) – During the annual tourism breakfast hosted by the Decatur Morgan County Tourism and the Decatur/Morgan County Hospitality Association on November 9, 2017, at Ingalls Harbor Pavilion, tourism figures for 2016 and six awards were presented and five corporate companies were recognized for excellence in tourism.

According to the most recent economic impact analysis conducted by the Alabama Tourism Department, travel-related expenditures for Morgan County in 2016 exceeded $179 million, an increase of 12.8 % from 2015. Annual state lodging taxes collected in Morgan County in 2016 garnered over $900,000. The tourism and travel industry within Decatur and Morgan County provided 2,080 direct and indirect jobs for local residents and total travel-related earnings for Morgan County exceeded $48 million, reflecting a 7.8% increase. “Tourism puts money in the pockets and purses of our local citizens,” said Decatur Morgan County Tourism President/CEO Melinda Dunn. “Without the dollars collected by the tourism industry, each household in the state would end up paying $444 more in additional taxes, according to the reports developed by economist Dr. Keivan Deravi.”

According to the report, statewide tourism industry has grown by 5.4% with more than 25 million visitors spending $13.3 billion and creating $836 million in state and local tax revenues in 2016. An estimated 179,644 jobs are attributable to tourism and the total impact of the travel industry on Alabama’s earnings in 2016 is estimated at over $4.7 billion. The general fund of the State of Alabama received over $49.4 million from lodging tax revenues and travel spending in Alabama has doubled over the previous 14 years.

Wade Weaver, treasurer of the Decatur Morgan County Tourism board of directors, stated, “When we hear the word industry, we tend to think in traditional terms such as the processing of raw materials and manufacturing of goods in factories. However, tourism is an industry, and it is proving to be a natural in its role as a key economic driver in our local and state economy. It continues to be a sweet time for tourism in our Sweet Home Alabama.”

This year’s theme for the annual tourism breakfast was Tourism: It’s In Our Nature. During the presentation, Decatur Morgan County Tourism took time to reflect on growth resulting in new visitors and revenue to the city and county. Decatur and Morgan County boast over two dozen annual events that bring over 100,000 visitors to the area. The special events and tournaments hosted in the area encompass activities that range from soccer to dog shows, tennis to fishing, Ultimate Frisbee to Lacrosse, horse shows to hockey. “Over 8,000 documented hotel rooms from events hosted in the area translate into an economic impact of over $5.9 million dollars for Morgan County alone,” said Dunn.

Additional developments of 2016 that had a positive impact on tourism growth in Decatur include:

- From 2009 to 2016, using data only from events where the Decatur Morgan County Tourism served as the official housing bureau, sporting activities at Jack Allen Recreation Complex, which include soccer, lacrosse, archery and ultimate, brought in a documented 41,821 room nights for the area and an economic impact of $30,909,108.

- Decatur Morgan County Tourism received a grant to develop three new pieces promoting local heritage to include a new African American Pioneers Brochure, signage for the Burleson Fine Arts Center and a brochure to accompany the new Trail of Tears Interpretive Trail and its signage that was installed in 2017.

- Decatur and Morgan County received national media attention on ESPN and Fox Sports SE through coverage of various sporting events that include fishing on Wheeler Lake and softball at Wilson Morgan Park.

- Point Mallard Park was named as one of Alabama’s top 10 tourist attractions for 2016 by the Alabama Tourism Department.

- A new state-of-the-art visitor’s kiosk was installed at the Ardmore Welcome Center this year. The kiosk provides tourists a new way to discover Decatur and Morgan County by providing instant access to information on attractions, festivals and local businesses. Additionally, a new visitor panel located above a key entry that visually connects to the display was installed.  Each year, over one million visitors stop at Ardmore.

During the annual breakfast, the Decatur/Morgan County Hospitality Association honored area hotels, industries, and citizens with its annual awards. Based on data submitted from seven participating hotels in Decatur, the Top Five Corporate Companies producing the most room nights in Morgan County during 2016 were recognized. Those receiving recognitions were Toray with 1,824 room nights; 3M with 1,905 room nights; Nucor with 2,461 room nights; United Launch Alliance with 3,636 room nights; and Hexcel with 5,346 room nights.

Each year, the Decatur/Morgan County Hospitality Association selects an Event of the Year and honors its impact on Decatur and Morgan County. This year’s honoree is a relatively new event that has shown significant growth since its inception five years ago. The 2017 Event of the Year is Battle at the Jack. This three-day tournament attracts up to 120 teams from across the Southeast, bringing some of the region’s best youth soccer players to Decatur and producing 367 room nights in September. Hosted by the River City United Soccer Club, Battle at the Jack is an Alabama Soccer Association and United States Youth Soccer Association (USYSA) sanctioned tournament that offers competitive soccer opportunities. Funds raised from this event are used to support soccer scholarships for children.

The Good Neighbor Award is given to a person, business, organization or entity whose body of work has had a significant impact on local tourism. The “Good Neighbor” may be an event organizer who lives out of town but helps with events in Morgan County; it can be an organization or business that significantly supports local events, or a person whose job may be outside the typical realm of tourism but whose work has made a difference. When Hurricane Irma forced people to flee their homes seeking refuge in Decatur and Morgan County, many local hotels hosted evacuees and made this difficult time in their lives easier and local citizens and churches sprung into action and brought food. The Good Neighbor Award is presented to all of those individuals and organizations that assisted the evacuees during their stay in Decatur.

To go along with Decatur Morgan County Tourism’s new tag line, a new award was presented at this year’s tourism breakfast. The first recipient of the Create Your Adventure award is Mr. Art Thrash with the Alabama Jubilee Hot-Air Balloon Classic. Thrash has served on the Alabama Jubilee committee and also has been the pilot for the city’s balloon for many years. He is retiring as pilot this year.

Presented to a person, or persons, within Morgan County who has contributed significantly beyond their professional duty to the development and promotion of tourism for the betterment of Decatur and Morgan County, the 2017 Julian Walker “Mr. Tourism” Award was awarded to Mr. Tyler Jones, owner of The RailYard and Whisk’d Café.

The Gilmer Blackburn Legacy Award was created as a means of recognizing an individual who has shown a long lasting and permanent contribution to the industry over the years and has helped change the tourism landscape of Morgan County. It is named in honor of the late Mayor Blackburn who was instrumental in developing the foundation of the tourism industry here. For his service to Decatur and Morgan County and the tourism industry, Jimmy D. Smith of Jimmy Smith Jewelers was presented with the 2017 Gilmer Blackburn Legacy Award.