A great summer of music takes on a country flavor  as the City of Decatur Parks and Recreation Department proudly welcomes audience favorite  Jeff Whitlow and the Old Barn Band  in concert on Monday, June 18 at the 2012 Paul Stroud Concerts by the River series. All concerts are open to the public and are held at . Concerts begin at 6:00 PM and usually conclude by 8:00 PM.  For updated schedule information, please call 256-341-4818 or visit www.decaturparks.com.  In case of inclement weather, cancellation decisions will be announced after 4:00 PM on the DPR website and will also be posted on the DPR and Decatur, Alabama Facebook pages.

Great country music will fill the evening air as Jeff Whitlow and the Old Barn Band take the stage on June 18th!  Influenced by classic country artists such as Merle Haggard and George Jones, Whitlow has recorded professionally in Nashville and has numerous CD’s to his credit, including 2010’s My Originals and More and 2008’s  collection of country gospel selections, I Saw the Light.   In addition to country classics, this show will include samples of original tunes and favorite country gospel numbers. In 2007, Whitlow was asked to perform at  Governor Riley’s Inaugural Kick-Off Boots and Barbecue Party, after writing the song  “Headin’ to Montgomery Again.”  In 2010, the group opened for country stars including Daryle Singletary, Rodney Atkins, Sammy Kershaw and Billy Joe Royal.  They have also headlined shows for country stars including Aaron Tippin and for Larry Gatlin and the Gatlin Brothers Band.  The group has performed at the Hank Williams Festival and has offered a sold-out Honky Tonk Christmas Show at the VBC during the past holiday seasons.  Talented band members joining Whitlow in the Old Barn Band include Ryan Gilley (drums)   Porter Dutton (guitar and vocals),  Mike Thompson (keyboard and vocals) Gaylon Parker (bass and vocals)  and Wayne Reburn (lead guitar.)  The band performs throughout the regions at festivals, fairs, special events and is available for private bookings.  The music of Jeff Whitlow and the Old Barn Band will get the audience moving with its classic country sound.  For more information, please visit www.jeffwhitlowcountry.com or  myspace.com/jeffwhitlowcountry. 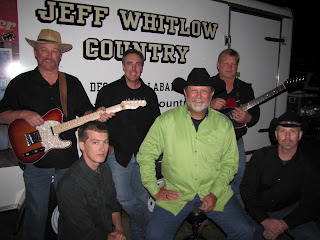